First, sorry about my english.

I have actualized my transmission to version 3.0. When im trying to configure blocklist , web interface says that i dont have any blocklist.

Im trying to use update button but nothing happens.

I had eddited settings.json file to enable blocklist like:

Also, in web interface, show a button to active blocklist and a field to write, but only i can write numbers... What is this field for? 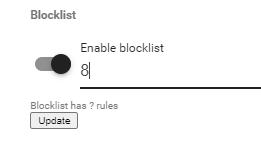 I used your link to update and it worked fine?
I put it in the preferences under privacy
Top

the script deletes blocklists you've removed from BLOCKLISTS array. However, I recommend you to close your Transmission client and then running the script (after blocklist deletion).The script finds out that the blocklist is not available anymore, warns you about it and asks you whether to continue downloading other blocklists.
Top
Post Reply
4 posts • Page 1 of 1